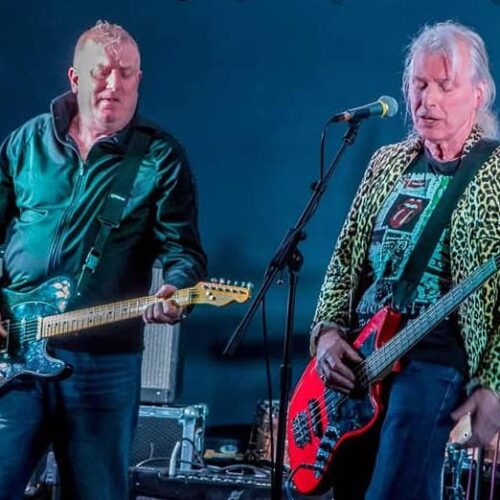 Spinout was conceived by Gary Roberts following the disbanding of his 80’s pop outfit Attractive Colours. Gary is a seasoned professional musician and song writer having worked and toured with respected artists such as Denny Laine (Wings). He has written music for organisations such as the BBC, this includes writing the theme tune for his own father’s programme the Russ Abbott show when he was just 19 years old.

Spinout was crafted with the intention of creating an evolving project, rather than a band of static musicians. The idea being, simply, to have the input of several professional players whilst enabling them to produce music that resonates with their listeners. Playing grass roots material suited to the chosen venues such as – festivals, club venues, public houses and private events.

Spinout enjoys a vast range of contributing musicians, including the likes of Paul Inder (Motorhead), Garry Nuttall (Robbie Williams), Steve (Smiler) Bernard (Mike Peters) and Zak Starkey (Known for his drumming with The Who and Oasis) most surprisingly playing guitar. In addition, the band has also worked with the record producer, Stuart Epps and performed live with Ben E King.

Gary is a musician with a rare ability to write songs that appeal directly to human emotions, causing one to feel connected on a deep level with the music. This is further enhanced by Gary’s hypnotic voice that compares with incredible similarity to that of David Gilmore. His vocal ability is not a manufactured technique but a natural heartfelt sound.

Spinout provides an incredibly energetic live performance, delivered by music professionals. Although the set is made up of mainly original music, the songs are catchy and well delivered – on first listening you will feel completely familiar and at ease with the songs. Repeat bookings are the norm for the band and they consistently receive high levels of praise from their clients. Let them entertain you!

Spinout UK
Brought to you by Real Food Festivals
×