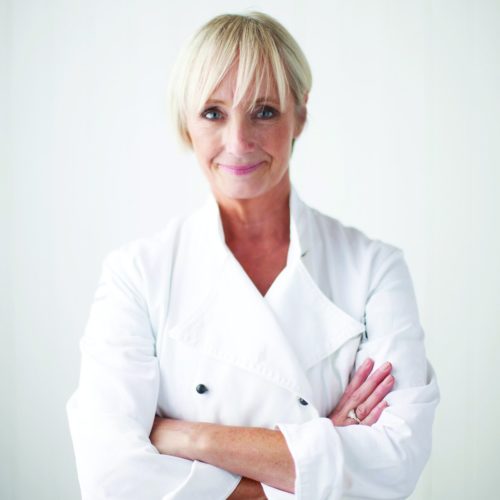 A chef and cookery demonstrator, Lesley’s lively personality makes her a popular television cook and, as a regular member of the team of Ready Steady Cook (BBC 2), and This Morning (ITV1), a recognisable household name. Lesley runs her immensely popular cookery school in Dorset and often acts as spokesperson for several large food brands.

She studied French Cuisine for three years at Ealing College, which included time as a chef at the Waldorf Hotel. After competing at Hotel Olympia salon culinaire she won two silver medal and one gold which won her a scholarship to work at the Intercontinental Group in Dusseldorf and Berlin.

She also spent 6 months travelling around New York, Boston and Martha’s Vineyard working in various restaurants until she returned to London

In 1978 Lesley joined Prue Leith’s Restaurant and was quickly promoted to the position of senior chef. She then worked as a freelance corporate chef and caterer for government officials before joining Leith’s School of Food and Wine as an instructor, rising to head teacher. Here she perfected her cookery demonstration and food photography skills. She often represents British food at international cookery displays, in her original and modern style. She is passionate about seasonal, local food and believes that ‘Good is simple, simple is good’.

She has worked in television since 1989. In addition to this she has written 20 books and has supported the Christchurch Food Festival with its work in schools since its inception in the year 2000.

Lesley Waters
Brought to you by Real Food Festivals
×