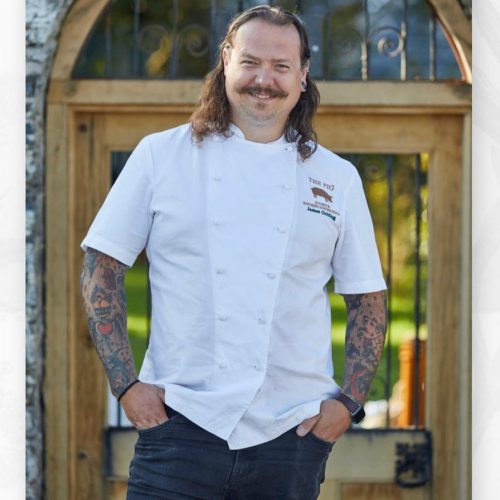 Uncomplicated, simple British food, is how the menu at The Pig Hotel, in Hampshire, is described. It’s a hotel where forager and gardener are as much part of the team as the sous chef.

Chef James Golding has been at the helm since The Pig opened in 2011.

James’s influences have come from a childhood spent in Hampshire and in and around New Milton and New Forest where shooting, fishing and foraging were simply a way of life. With an Italian maternal grandmother, there was a family ethos of spending time with food and family, and home-made pasta was a favourite.

At 16, James moved up to London for a Specialised Chef Apprenticeship Course, going on to work at The Savoy under acclaimed chef Anton Edelmann for four years.

It was when he moved back to Hampshire, to relocate and raise his young family, that James realised the wealth of produce that could be locally provided by New Forest producers. He has been more and more inspired by the region and what it can offer; the forest, the farms and the sea.

Since its opening, The Pig has been a storming success. The reputation for its cuisine, innovative menus and provenance of its ingredients have been tremendous; and, rightly so. It has been a whirlwind for James who is delighted that the concept of garden and greenhouse to dinner plate has been embraced by diners.

James Golding
Brought to you by Real Food Festivals
×