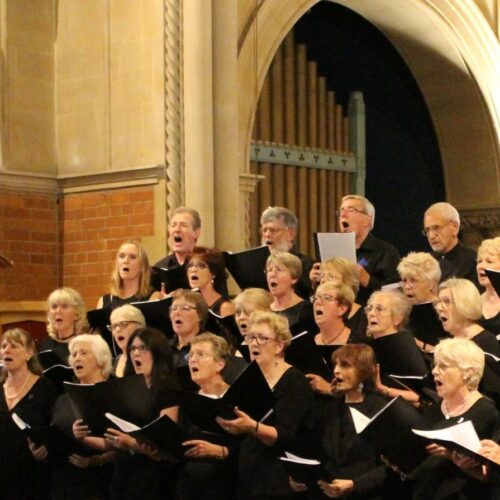 Rising Voices aims to link music and health together. Participation in a musical activity has been shown not only to improve wellbeing but also to aid communication at a time when people are struggling to adapt to a diagnosis of cancer.

Rising Voices Wessex an innovative idea which evolved from a ‘Living Well with Cancer’ conference in Dorset in 2012, the Poole choir was formed in 2013 and the Bournemouth Choir in 2015.

Rising Voices Wessex community choirs were set up to help people recover from treatment for cancer or to help those affected by the experience of cancer in the family. The Poole choir was launched on the 8th January 2013 with an appearance on BBC South Today and has since been on ITV and heard on Solent Radio. The Poole choir originally meet at the Lighthouse Arts Centre in Poole, but now meets at St Johns Church in Parkstone. The Bournemouth Choir was formed in 2015 and meets at the New Church in Tucton.

The combined choirs currently have over 100 members meeting weekly for rehearsals and who take part in performances throughout the year – these performances help raise funds to support the choir. Taking part in performances is something that most members enjoy but isn’t compulsory! The emphasis is on having fun, with choir members having their say on which songs they would like to sing so the repertoire is varied.

A grant from the former Dorset Cancer Network in 2012 supported the launch of the choir .The choirs has since received funding from Macmillan Cancer Support and the Lottery as well as other local organisations.

Rising Voices Wessex Community Choirs are a registered charity in England and Wales (1165053).

Rising Voices
Brought to you by Real Food Festivals
×