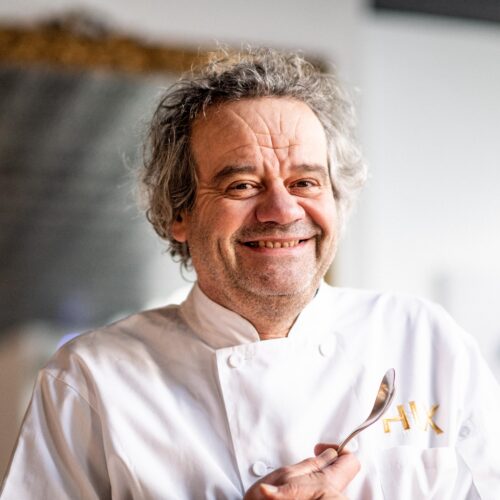 Mark is frequently lauded as one of Britain’s most eminent restaurateurs with an unrivalled knowledge of ingredients with provenance. He is an award-winning author and food writer with 12 cookbooks to his name, the latest of which, Hooked, regales stories of fishing from his childhood through to the present day. Previously a regular contributor to City AM and GQ, Mark was previously the food writer for The Independent on Saturday for 14 years. He now has a regular column in The Telegraph, Dorset Magazine and Marshwood Vale and a weekly cookery show on Lyme Bay Radio.
After 17 years with Caprice Holdings, he left his Chef Director role in 2007 to open HIX Restaurants which spread across London’s West-end and City as well as his native Dorset, until they closed in 2020 as a result of Covid-19
Mark opened The Oyster & Fish House in Lyme Regis in July 2020 as well as launching his HIX Oyster & Fish Truck in Morcombelake, selling wet fish and seafood from Lyme Bay Reserve fishermen. He opened The Fox Inn pub in Corscombe in December 2020 which focuses on local meat and game dishes with it’s own Kitchen Garden supplying the chefs with fresh vegetables and herbs every day.
Mark received an MBE for his services to hospitality in the New Years’ Honours list 2017.

Mark Hix
Brought to you by Real Food Festivals
×