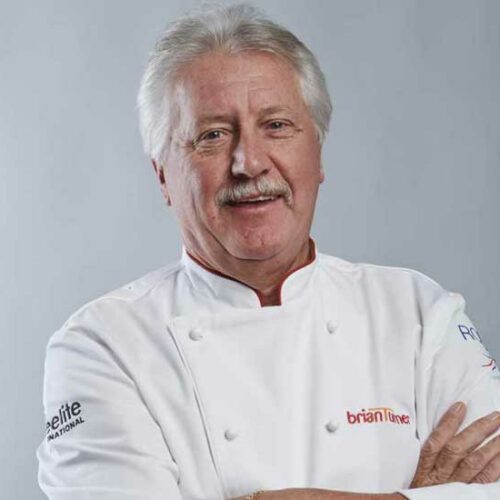 Brian Turner is said to be one of Britain’s most well-known chefs having trained at Simpson’s in the Strand, The Savoy, The Beau Rivage in Lausanne and Claridge’s.

In 1971 he opened the kitchens of The Capital Hotel with Richard Shepherd where they won a then rare Michelin star. In 1986 he opened his own restaurant Turner’s in Walton Street, Chelsea. After fifteen years of success he opened restaurants in Birmingham and Slough and in 2003 at The Millennium Hotel in Grosvenor Square, Mayfair, London. Then opening Turner’s in Butlins, Bognor Regis between 2010 – 2017.

Turner is the President of the Royal Academy of Culinary Arts which he has combined with a successful career as a TV personality, Ready Steady Cook being the most successful programme running for 14 years as well as regular appearances on This Morning, Saturday Kitchen, Saturday Morning with James Martin and his own shows ‘A Taste of Britain’ and ‘My Life on a Plate’ with the BBC.

In June 2002 in the Queen’s birthday honours list Turner was awarded a CBE for his services to tourism and training in the catering industry. Since then Turner has been made an Honorary Professor of The University of West London, Honorary Fellow & Visiting Professor of University College Birmingham and a Fellow of the City and Guilds of London Institute. He has also received Honorary Doctorates of Science at Leeds Metropolitan and Sheffield Hallam Universities. Turner has received an Honorary Apprenticeship Award which he feels complements his work with the Adopt a School scheme and the Futurechef competition which both encourage young people to come into the catering industry. In February 2019 Turner was awarded the Special Award from The Restaurant Association for his dedicated services to the hospitality industry. Turner plays an active role in many campaigns to encourage British people to get back into the kitchen and enjoy cooking even more.

In the little spare time that Turner has he enjoys supporting England in all sports, occasional trips to the horse races and is very proud to have recently been made Honorary Vice President of Brighouse & Rastrick Brass Band, brass band music being a great love of his.

Brian Turner
Brought to you by Real Food Festivals
×